Drones are becoming increasingly popular with children of all ages, but finding one which is suited to their needs, and comes at a reasonable price can be difficult. That’s why we are here to help, by answering some FAQs about drone shopping. We have also reviewed some of the best beginner drones which are ideal for children, some of which can be found here. There is sure to be something to suit your child’s needs here! 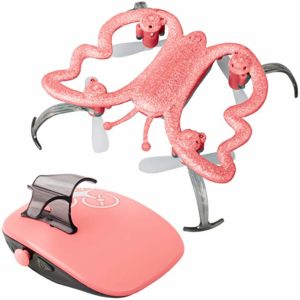 This mini drone is great for kids to practice their skills indoors. It is controlled using simple hand motions, rather than using a remote controller. It can even do a 360 flip with just a flick of the wrist! The drone can be charged in just half an hour, which will then give 5 – 7 minutes of flying time. It has a 20m flight range, so it can be used outdoors too. Because it is small and lightweight, this drone is not ideal for using in windy conditions.

The butterfly drone has a 6 axis gyro and auto hover function, which makes it easy for beginners to fly. It comes in a choice of three different colors – pink, blue or green. This is a great drone for girls! 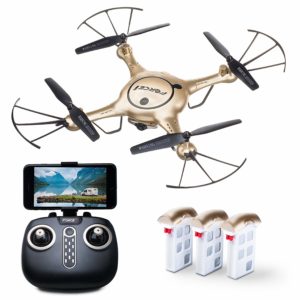 This Force 1 drone comes with 2 spare batteries, so you can fly for even longer without having to return home to charge. The controller has a space to hold a phone, which can be used to stream live HD video from the drone’s camera. It is easy to operate – with one-touch take off and landing – and can even do 360 degree flips at the press of a button.

The quadcopter drone comes with headless mode, which makes controlling its direction a lot easier. With headless mode on, a drone will fly relative to the direction of the controller, not to it’s actual orientation. This model also comes with high and low speed settings, and it has a great range of around 160 feet. 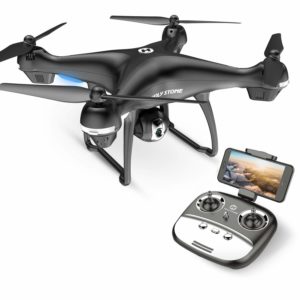 This Holy Stone drone has some excellent features, so it is ideal for older children and teenagers. It has assisted headless mode, and altitude hold, as well as one key take off and landing. This means this is one of the best drones for beginners, as it is easy to learn how to use, and lots of fun! The flying time is around 15 minutes before recharging is necessary.

A cell phone can be attached to the remote controller, which will provide a live video stream from up to 1600 feet away. However, remember your drone must remain within your line of sight at all times so it might not always be possible to fly it so far away. The starter quadcopter has an auto return home feature, so when the signal is lost or the battery is running low, it will use GPS to return home. It also has the follow me feature, which makes flying even easier – you don’t have to lift a finger! 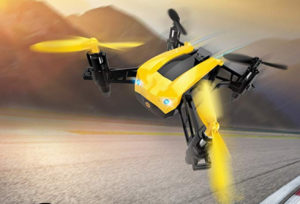 This racing drone kit is great for those on a budget. It can reach a top speed of around 30 mph, in just a second. It’s very durable, so there’s no need to worry about the inevitable crashes which will happen when flying at such high speeds. It has a flight time of around 20 minutes on a single charge, as it comes with two batteries. It also offers headless mode for beginner pilots.

The DEERC drone can roll through 360 degrees with the press of a button. It also features LED lights, which are ideal for making the drone more visible. It also has six gyros to keep it perfectly balanced. The quadcopter comes with two sets of spare propellers as well as guards for them which will keep them protected in the event of an impact. 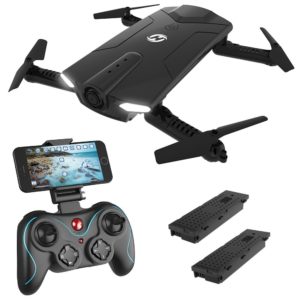 The Holy Stone HS160 is a foldable drone, which is perfect for taking anywhere. The blades fold in to the body, reducing the size of the drone and making it easier to transport. This design also helps protect the blades when the drone is not in use. The drone comes with a HD camera which can record photo and video and transmit it live to a phone, or store it in the app.

Like most drones for beginners, this model comes with easy one key start, allowing beginner pilots to get started right away. It is small and lightweight, which means it should not be used in windy conditions, however this also means FAA registration is not required. A flight can last between 7 – 9 minutes on a single charge, and the controller transmission range is around 50 – 70 meters depending on conditions and obstacles. 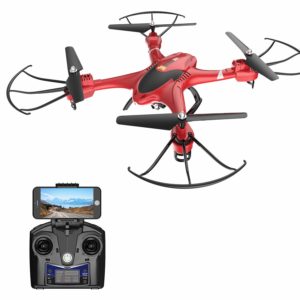 This red drone comes with a first person view HD camera, which is sure to delight children! This allows photos and videos to be taken using an iPhone or Android device. The drone has an altitude hold function, which means it will hover at its current height, making taking photos and videos somewhat easier. It has similar features to many beginner drones, such as return to home, headless mode and a 6 axis gyro for stability. However, coming in at under $100, this drone is a great bargain!

The phone controlled drone has a gravity sensor mode, which means it can be operated by following a phone. The smartphone drone will move according to the movements made on the smartphone, using the compatible app interface. 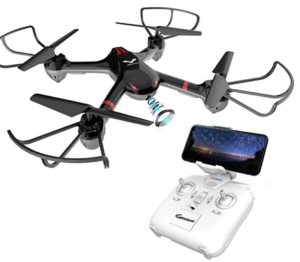 This Drocon drone costs under $75, making it perfect for beginners to the hobby. It’s ideal for parents who don’t want to spend a lot of money, in case their child doesn’t get into flying drones. It offers many great features despite the budget price tag. For example, the iOs and Android app can be used to control the drone, as well as watch a live video of the flight.

For kids looking to learn to fly a drone, this model is a great choice. It offers headless mode, one key return and 3D flip mode. For more advanced users, the headless function can be turned off. There are also two speed settings, so beginners can start off slow before advancing to the top speed level. 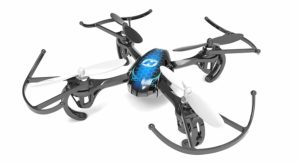 This Holy Stone quadcopter costs under $50, making it perfect for younger pilots who don’t need a lot of fancy features. It still features a gyro for stability, as well as anti-interference technology. It offers short flights of between 6 -8 minutes on a single charge, which takes around 45 minutes. It can be flown up to 50 meters away depending on weather conditions.

This is one of the best drones for kids, as it has 3 different speed modes for all ability levels. As your child’s flying skills improve, they will be able to advance to the next level, meaning they will always have a fun challenge. There are LED lights on the drone, which makes it look even cooler when flying on darker days.

This LED drone is easy to fly and looks superb, making it the perfect choice for children. It has stylish blue and green lights, which look great when used in the dark. The drone has two speed settings, and can perform 360 degree flips. It can be used indoors as well as outdoors, so it can be used at any time! It comes with a spare battery, which gives a total of almost 20 minutes flying time.

The Force 1 drone comes with a set of four spare propellers, meaning if they become damaged they can easily be replaced. It’s a great idea to teach kids how to perform simple maintenance tasks on their drone, so if it ever gets damaged when they are flying, they will be able to repair it by themselves. Spare parts are available for most drones, meaning you don’t have to replace the whole thing if it is involved in a crash.

FAQs About Drone Use

Many parents are new to drones and will therefore have a lot of questions about their use and safety. Here, we have provided the answers to some commonly asked questions to help you understand more about drones and how they are used.

Where can I Fly my Drone? 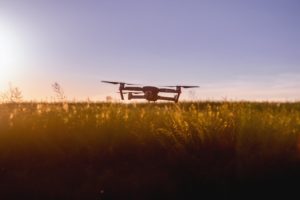 There are some places where drones are not permitted, so it is important to double check prior to flying so not to cause any trouble. Drones should not be used within 5 miles of an airport, or near prisons. A drone should not be flown higher than 400 feet, and it must remain within sight at all times. It’s also not permitted to fly a drone over groups of people, such as stadiums, beaches and public events where there are large numbers of people gathered.

Every region has it’s own rules regarding flying drones. You should check these to determine whether or not it is allowed to fly a drone in a public place. It’s best to use common sense and stay clear of people, buildings and other obstacles, just in case the drone malfunctions.

What Features Should my Kids Drone Have?

Each drone has individual features, but there are some which make a drone particularly suited to children. One of the best features a drone can have is Return to Home. This allows the pilot to call their drone back to themselves with the press of a button, which is perfect if it goes out of sight. A kids drone might also come with easy take off and landing functions which are perfect for beginner pilots. Kids will also probably enjoy having a camera on their drone, so this is something to look into.

How Can I Keep my Child Safe When Flying a Drone?

Safety is important when flying a drone, especially for beginners. It might be worth getting a small, indoor drone to practice with before going outdoors with a more pricey drone. You should thoroughly read the instruction manual with your child and make sure they understand all the controls. It’s best to use the drone in an open space away from buildings and other people until your child has complete control over their new gadget.

The Holy Stone HS160 is a great choice for kids and teens looking for their first drone. The unique folding design is ideal for taking the drone out for a flight, and will help keep it protected during transit. It has great features, such as simple one key start and a full HD camera capable of capturing videos and pictures, streaming them to a compatible mobile device.

For parents on a budget, the HS170 is ideal. It has many great features and is easy to learn to fly, but still comes at a very reasonable price. It offers 3 different speed settings, so it is perfect for kids who are learning and improving their skills.

Best Board Games for 10 Year Olds