Best Board Games for 8 Year Olds

Many 8 year olds love to play games, although sometimes they prefer video games to traditional board games. Here, we have reviewed some great family games which are sure to be loved by 8 year old boys and girls, and help get them away from their screens. We have mainly chosen classic games which have been known and loved for many years, so mom and dad are certain to enjoy playing them again. Some games have been re-released with a more modern twist, some with electronic versions, which are sure to delight the younger generation.

Below, you will find our reviews of seven of the best games for kids aged 8. There is sure to be something the whole family will enjoy playing here. 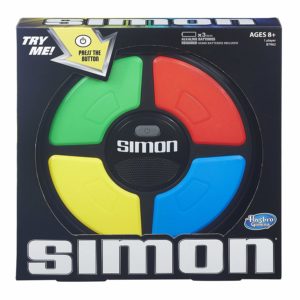 This version of the Simon game is a modern remake of the classic 80s game, which moms and dads might remember from their own childhood. It involves copying a random pattern of lights, to try and get a high score. The game automatically keeps track of the highest score, so kids can keep playing to try and beat their previous score. The sequence is different every time, so the game can be replayed over and over again without getting too easy or boring.

The Simon Says game is great for single players or using with friends. Whilst only one person can play at a time, it’s fun to have a competition to see who can reach the highest score. There is a newer version of the game known as Simon Air, which might appeal even more to the younger generation. This version uses sensors to track your movements, so you don’t need to touch the buttons.

The Rummikub game is great for families to enjoy together, and it’s easy to learn so everyone can enjoy the game. The rules of the game are similar to card game Rummy, except using tiles instead of playing cards. The object of the game is to get rid of all your tiles, by forming sequences of either consecutive numbers or groups of all the same number. To make it more difficult, the Rummikub tiles come in four different colors, so in each set all the tiles have to be the same color too.

Rummikub is actually useful for learning STEM skills, such as planning, sequencing and recognizing patterns. The game provides endless fun, and will continue to be enjoyed even as kids get older. The game is suitable for 2 – 4 players, and involves a mixture of luck and strategy so everyone has an equal chance of winning. 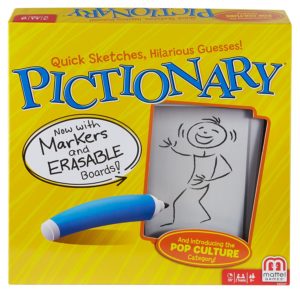 Pictionary is a great game for family game nights, and is sure to result in lots of laughs! There are two different levels of clues – 120 adult and 80 junior, so everyone can join in with an equal chance of winning. This classic game has been loved since the 80s, and it is still just as popular today. This version comes with two boards and erasable markers, as well as a game board, pieces and a timer.

The Pictionary game is fun for kids to play with their friends, the rules are simple to learn and it will keep them amused for ages. It can also be played on teams, making it great for parties, or for mom and dad to play against the kids! The game is ideal for improving drawing and reading skills, so kids will be learning and practicing their skills as well as having loads of fun and laughs. 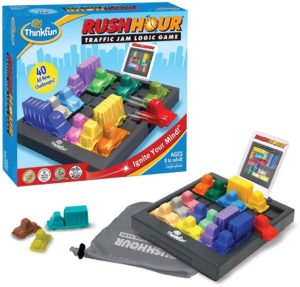 The traffic jam game is great for 8 year olds to improve their STEM skills, and improve their problem solving skills. The game involves setting the cars up as shown on one of the 40 cards, then sliding them around in order to release the red car. The cards come in varying difficulty levels, so there is something for all ability levels. Kids can aim to release the car in as few moves as possible. This means the game won’t get boring, and they can keep playing it over and over to beat their score.

Thinkfun Rush Hour is a great game for helping kids learn to focus and be more patient, as well as accept failures and try again. The game is ideal for kids to play alone, or they can take turns with friends or mom and dad to complete one card each. The pieces are high quality and will last for many years, and there is a handy storage bag to prevent anything from getting lost. 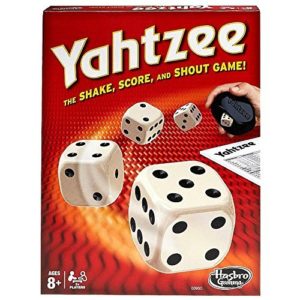 Yahtzee is a great game for children and parents to enjoy together, and it’s great for helping math skills too. The game involves rolling 5 dice and trying to make patterns such as runs, full house or 4 of a kind. Players take turn to roll the dice, with 3 rolls allowed on each turn. Any useful dice can be kept aside, before choosing what you want to score for when all three rolls have been taken.

The Yahtzee score card is ideal for helping with counting, as players must add up the total of their die on each turn, as well as adding their total score at the end of the game. The winner is the player with the greatest total score after each player has completed their score card. 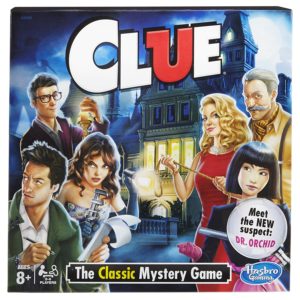 Cluedo is a fun game for the whole family to play, and it lasts a while so it is perfect for passing a bit of time away. It requires at least 3 players, so it’s great for mom and dad to spend some quality time with their son or daughter. The classic game involves moving around the board from room to room, attempting to solve the murder mystery by naming a suspect and a weapon.

The original Clue game is ideal for helping improve problem solving skills, as well as planning ahead. This updated version of the game offers the same benefits, and the same amount of fun, but has the addition of one new suspect, Doctor Orchid. Clue is a game which is fun every time it is played, as it is always different, meaning it will be enjoyed for many years, by kids and adults alike. 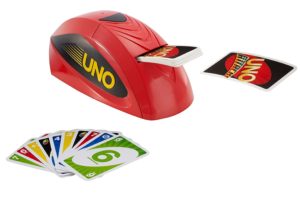 The Uno Attack game is a fun twist on the classic card game. The game is played in exactly the same way as the original, but if you are unable to play you must press the button on the machine rather than drawing a card from the discard pile. This is where the fun begins – sometimes nothing happens and other times the machine will throw out an unpredictable number of cards! The machine makes sounds as it works, which adds to the fun for younger children.

The Uno electronic game is a great change for parents and children who are getting tired of the regular version, and gives it a new lease of life. It can be enjoyed by 2 – 10 players, making it ideal for parties and groups to play. The cards can be stored inside the machine when not in use, so it is easy to store and can also easily be taken to friend’s houses to play.

We have looked at loads of great games for children aged 8 here, but Rummikub is one of our favorites. It is fun for the whole family, and everyone has a good chance of winning. We love how it can teach kids various important skills, and is lots of fun at the same time. Mom and dad will love playing this classic board game, and might even remember it from their own childhood.