Best Board Games for 10 Year Olds

Finding a board game to keep a 10 year old entertained can be a challenge. Often at this age, video games become preferable to spending time face-to-face with family and friends. However, physical interaction with others is important for children, and adults, of all ages. That’s why we believe finding fun family board games is a great idea, and can help improve parent-child relationships. Here, we have chosen 9 fantastic games which are great for 10 year olds to play either with their friends or with parents.

Top Board Games for 10 Year Olds

Below, you will find our picks of the best games for children aged 10. There’s a mix of classic games, some of which have been given a more modern twist as well as more contemporary games. So, there’s something to suit all tastes here. 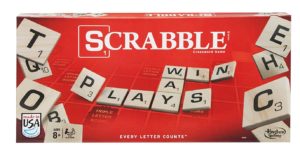 Scrabble is a classic board game which has been popular with older children and adults for many decades. The game involves players making words from their letter tiles, and trying to score as many points as they can. So, it’s great for improving spelling and expanding the vocabulary. Mom and dad will love playing Scrabble with their kids, and might even play it themselves too – it really is a game for everyone to enjoy.

Word puzzle games are ideal for family game nights as well as parties. Scrabble can be played on teams or by up to 4 individual players, so it is perfect for all occasions. It comes with a board, 4 tile racks, 100 letters and a drawstring bag to store them in. The game is great for promoting social interaction, at a time when computer games are more popular, and it is sure to keep the mind active! 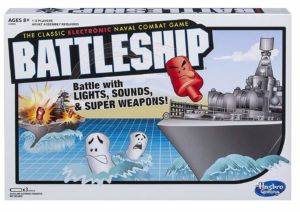 The electronic Battleship game is a fun strategy game which can be played solo or with two players. The rules of the game are the same as the classic version, however it also comes with fun lights and sound effects which are sure to be a hit with kids of all ages. The game can be played against the computer, which is ideal for when no one else wants to play. It’s also great for travel, as all the pieces can be stored neatly inside.

The Battleship game has new features which make it perfect for players of all ability levels. You can position your ships any way you wish, or choose from one of the 30 included pre-progammed layouts. There is also the option to launch multiple attacks in one turn, and there are additional weapons such as air raids and battle scans.

Settlers of Catan is an excellent strategy game for older children and teenagers, even adults. It can be played with three or four players, and a game typically lasts between 45 – 90 minutes. The game involves rolling a dice and collecting different resources, which are then used or traded with other players to expand and grow your settlement. The more settlements you create, the more victory points you earn. The first player to reach 10 victory points is the winner.

The Catan board game is great for socializing, as it involves a lot of interaction with other players. It has won many prestigious awards, including Game of the Year and even Game of the Century! The game rules can be learned in around 15 minutes, less if someone else explains them. It can be re-played over and over again as every game is unique, meaning it will provide years of enjoyment.

The Disney villains game is perfect for kids who are looking for something a little bit different. It’s a strategy game which is easy to learn and understand, but difficult to master! It’s for up to six players, as there are six different villains which can be played as. Each of the villains comes with their own guide, as they each require a different strategy to win. So, once you have mastered the game playing as one villain, move on to another and it’s like starting all over again. This gives the game high replay value.

The Disney game is full of well-loved characters, and it’s a nice change to play as bad guys! Even for those who aren’t fans of Disney, this is still a great family game which is perfect for children aged 10 years old and above. The game is fun with just two players, and equally ideal at parties or with groups of up to six people. A game typically lasts between 45 – 60 minutes, so it is the perfect way to pass some time away. 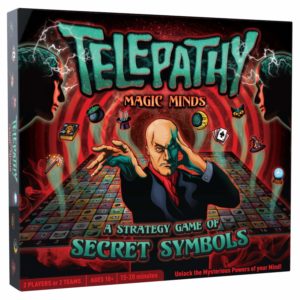 This fun board game is great for helping children practice their problem solving skills, as winning it involves using powers of deduction, logic and strategic thinking. The game consists of two boards, each with a coordinate grid filled with different symbols. Players each choose one symbol, then take turns to guess which their opponent has chosen. The first player to correctly guess their opponent’s symbol is the winner, but guess wrong and you will lose!

This cool board game is quick and easy to set up, and there are not many components which means you can start playing straight away. The game is described as being a cross between Battleship and Sudoku, as players use logic to eliminate certain squares, colors and columns. The game is great for exercising the brain, and will be enjoyed by older children and even adults. Players both have equal chances of winning, so children might end up beating mom or dad! 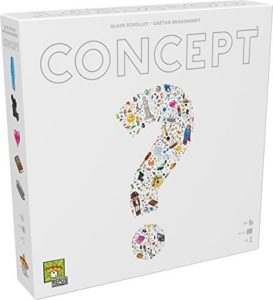 The Concept game is similar to Charades, but instead of acting out a situation, players use tokens to mark symbols on the game board to try and describe their ‘concept’. The game can be played by just two people, but it works best as a party game, with between 4 – 12 players. The word guessing board game is great for improving logical thinking skills, as well as creativity and imaginative thinking.

The Concept board has loads of symbols, and the game also comes with a set of cards which tell you which concept to depict. By correctly guessing what is being depicted, players win points. It’s a great game to play on teams, as younger players can team up with adults to have a better chance at winning! A game typically lasts around 40 minutes, but by increasing the number of points needed, it can last longer if desired. 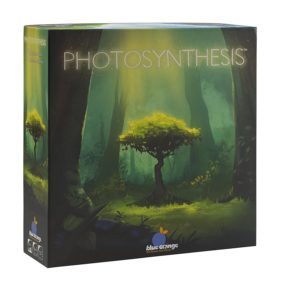 The Photosynthesis board game is ideal for older children who are looking for a game to challenge them. The game is suitable for 2 – 4 players, but it is best with 4. The artwork of the game is beautiful, and parents are sure to love playing it too. To win the game, players must grow their trees from seedlings to fully grown, collecting points as the trees absorb light from the sun’s rays.

The Photosynthesis game encourages players to care about the environment and learn about the life cycle of plants. By reaching the center of the game board, the trees will get more light, and give players more chance to win! It is a great strategy game for children and parents to enjoy together – the rules are simple to learn and understand but mastering the strategy needed to succeed takes a little longer. 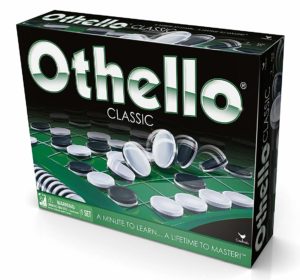 Othello is an old board game which has been around since the late 1800s, although it was originally known as Reversi. The strategy game is for two players, and it has very simple rules which can be learned in minutes. However, mastering the strategy will take much longer – the game will be enjoyed for a lifetime!

The object of the game is to ‘sandwich’ your opponent’s chips between two of your own, so you can then flip their chips to your own color. The winner is the player who has the most chips of their color at the end, meaning sometimes the game can be really close right to the end. The Reversi game comes with two trays to hold the chips, so it’s easy to store neatly. 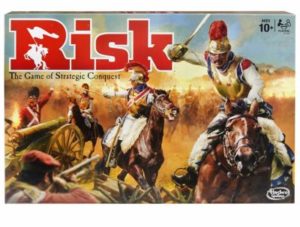 The original Risk board game is a classic family game for older children. The strategic game is suitable for between 2 and 5 players, and comes with easy to follow instructions for gameplay. The aim of the game is to occupy territories, whilst ousting your enemies from theirs. Each player is given a secret mission card, and if they manage to successfully complete their mission they win instantly.

Risk online is another great option for children who prefer computer games. In this case, it can be played single player against the computer. However, we believe playing face-to-face with friends and family is the better option. Playing online is great for practicing when there is no one else to play against, and is sure to help kids develop their strategy and help them beat mom and dad the next time!

We have looked at some great games for 10 year olds above, but our favorite game for the whole family to enjoy together is Concept. It is a great game for parties and groups, and children of all ages can play on teams with older kids or adults. The game encourages logical thinking and creativity, so it is educational as well as loads of fun! Concept is a unique game so it is perfect for kids who are getting bored with playing more traditional strategy games.